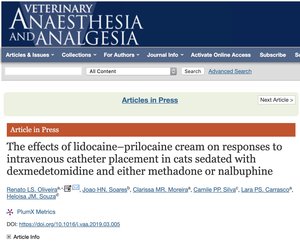 Résumé :
Objective : To compare the reaction to cephalic intravenous (IV) catheter placement with or without lidocaine-prilocaine cream in cats sedated with dexmedetomidine and methadone or nalbuphine. Study design: Prospective, randomized, blind study. Animals: A group of 24 female mixed breed cats.
Methods: Cats were randomly allocated to one of two sedation protocols: dexmedetomidine (0.01 mg kg−1) and methadone (0.3 mg kg−1; DEXMET) or dexmedetomidine (0.01 mg kg−1) and nalbuphine (0.3 mg kg−1; DEXNALB). Sedation was scored 30 minutes later using a Visual Analog Scale. Subsequently, a 2 × 3.5 cm area of the antebrachium over the cephalic vein was clipped, and half of the cats within each sedation protocol were randomly assigned for topical lidocaine–prilocaine cream (treatment) while no cream was applied to the other cats (control). After 20 minutes, an attempt was made to place a 24 gauge catheter into the cephalic vein and the reaction of the cats to this procedure was scored using a numeric scale 0–3. Sedation and catheterization reaction scores were compared between sedation protocols and whether cats were administered lidocaine–prilocaine cream or not using the Friedman test followed by the Bonferroni procedure. A p value < 0.05 was considered significant.
Results: Sedation scores were not different between sedation protocols or between treatment and control cats within each sedation protocol. All cats administered lidocaine–prilocaine cream showed no reaction to IV catheter placement. Among the control cats, no response was observed in one cat in DEXNALB. Catheterization reaction score was lower in the treatment cats in both sedation protocols when compared with their respective controls.
Conclusions and clinical relevance : Lidocaine–prilocaine cream applied for 20 minutes abolished the reaction to catheterization in cats sedated with dexmedetomidine and nalbuphine or methadone. Facilitation of IV catheter placement occurred within 20 minutes of lidocaine–prilocaine application.

2/ No Pain, No Gain? In Defence of Genetically Disenhancing (Most) Research Animals

Résumé :
Every year, around 12 million animals are used for the purpose of scientific research in the European Union alone. The procedures performed on them often cause significant pain and suffering. Despite regulations aimed at reducing this suffering, we can expect millions of research animals to continue to suffer in the near to mid-term future. Given this reality, we propose the use of gene editing to create research animals with a reduced capacity for suffering, in particular, from pain. We argue that our proposal would be in line with moral principles embedded in European regulations regarding animal research, and that it would facilitate compliance with these regulations. We also respond to the strongest argument against our proposal—the ‘no pain no gain’ argument.
PDF à https://www.capdouleur.fr/app/uploads/2020/06/animals-09-00154.pdf

Résumé :
Objective : The Canine Brief Pain Inventory (BPI) is an owner-completed questionnaire quantifying the severity and impact of chronic pain in dogs. The English version of the Canine BPI was adapted into French and the objective of this study was to validate this French version of the Canine BPI. Study design: Prospective clinical study. Animals: 32 dogs with a medical history, clinical signs, and radiographic evidence consistent with osteoarthritis.

Methods : Owners of dogs with osteoarthritis who were native French speakers completed a single administration of the translated questionnaire. The psychometric properties were evaluated including construct validity (by factor analysis), reliability (internal consistency), and convergent validity.

Results : Factor analysis on the responses from this cohort confirmed a two-factor questionnaire: the Pain Severity (PS) factor and the Pain Interference (PI) factor. The mean inter-item correlation for the PS questions and the PI questions was 0.74 and 0.53 respectively. These findings reveal strong internal consistency, suggesting that the questions contained within each factor measure the same concept and can be pooled to generate the PS score (PSS) and PI score (PIS). Cronbach’s α was 0.91 and 0.87 for the PSS and PIS, respectively. There was strong negative correlation between the PSS and PIS with the overall quality of life score (r = -0.62 and r = -0.79, respectively with p<0.001 for both), consistent with the hypothesis that increases in pain severity and interference with function are highly correlated with a corresponding decrease in overall quality of life.

Conclusions and clinical relevance
Initial validation of this French version of the Canine BPI represents an important step in the expanded use of validated owner completed outcome assessment instruments for use by researchers and clinicians who seek reliable methods to quantify the severity and impact of chronic pain in dogs with osteoarthritis.

Résumé :
Pain and inflammation are inherently linked responses to injury, infection, or chronic diseases. Given that acute inflammation in humans or mice enhances the analgesic properties of opioids, there is much interest in determining the inflammatory transducers that prime opioid receptor signaling in primary afferent nociceptors. Here, we found that activation of the transient receptor potential vanilloid type 1 (TRPV1) channel stimulated a mitogen-activated protein kinase (MAPK) signaling pathway that was accompanied by the shuttling of the scaffold protein β-arrestin2 to the nucleus. The nuclear translocation of β-arrestin2 in turn prevented its recruitment to the μ-opioid receptor (MOR), the subsequent internalization of agonist-bound MOR, and the suppression of MOR activity that occurs upon receptor desensitization. Using the complete Freund’s adjuvant (CFA) inflammatory pain model to examine the role of TRPV1 in regulating endogenous opioid analgesia in mice, we found that naloxone methiodide (Nal-M), a peripherally restricted, nonselective, and competitive opioid receptor antagonist, slowed the recovery from CFA-induced hypersensitivity in wild-type, but not TRPV1-deficient, mice. Furthermore, we showed that inflammation prolonged morphine-induced antinociception in a mouse model of opioid receptor desensitization, a process that depended on TRPV1. Together, our data reveal a TRPV1-mediated signaling pathway that serves as an endogenous pain-resolution mechanism by promoting the nuclear translocation of β-arrestin2 to minimize MOR desensitization. This previously uncharacterized mechanism may underlie the peripheral opioid control of inflammatory pain. Dysregulation of the TRPV1–β-arrestin2 axis may thus contribute to the transition from acute to chronic pain.